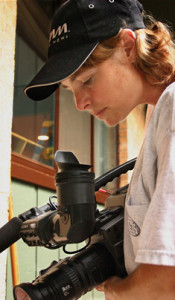 My life in television production began in 1991 when I joined Yellow Cat Productions in Washington, DC. I soon became Vice President of the company and worked as a producer, writer, director, camera operator, and editor.

Tubabs in Africa is another award-winning documentary that I directed and co-shot. It follows college students on a field study program as they navigate through the Gambian culture, learning about the world and themselves. It is also distributed by Documentary Educational Resources.

I left Yellow Cat Productions in July 2003, to enjoy life as a freelancer and write screenplays. I immediately got a job for four months with a British production company as their American fixer and assistant producer on a pilot for a reality show called Cha Ching Moneymakers. Discovery Channel bought the series, and I continued working on four more episodes as an associate producer. I scheduled all the shoots, developed story ideas, and acted as an assistant director in the field.

Since January of 2004, I have been freelancing as a producer, camera operator, sound recordist, and fixer for a variety of clients including Robert Greenwald, Yellow Cat Productions, Media Central, HGTV, TLC, BET, GVI, Tigervision and Redback Films of London as well as corporate and government entities. I continue to write and my screenplay In the Mouth of the Lion won third prize in the Los Angeles based African Film Commission’s storytelling competition. The screenplay was optioned but never produced.

In 2006, I wrote, produced, directed, and edited a short film called Run Cody, about a young boy who survived Hurricane Katrina only to land in the house of his estranged alcoholic father living in Washington, DC.

I now live aboard a 38-foot sloop and have combined my two passions: cruising and filmmaking. I recently completed post production on Red Dot on the Ocean, a feature-length documentary about Matt Rutherford, an Annapolis sailor who completed the first ever, solo, non-stop voyage around the Americas.

My other sailing documentaries are autobiographical. One is a docu-comedy about my first year-long cruising adventure with my husband, entitled Cruising on the Mary T: Nova Scotia to the Bahamas. The other, Cruising on the Mary T: Newfoundland’s Southwest Coast, is a short documentary covering the rugged landscape and hearty people of “The Rock.” Both are distributed by The Sailing Channel (TheSailingChannel.tv).

Prior to getting in the television business, I lived in Senegal, West Africa, for four years where I worked as a Peace Corps volunteer in a small village and then taught English as a second language at the American Cultural Center in Dakar. The lessons I learned about communal living from subsistence farmers in a Senegalese village have deeply influenced my approach to life.